Difference between DCS and SCADA 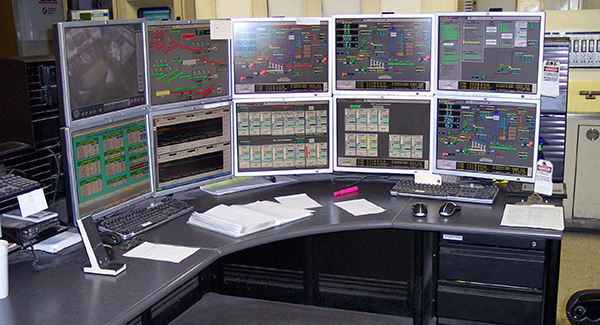 There are a lots of names !DCS,SCADA,PES,DMS,PMS,…!!!There are just names called by brands and vendors to compete together ,However we have two major automation architecture to discuses as simple as it can be ,DCS and SCADA,let look at them shortly

The DCS is usually used in factories and located within a more confined area. It uses a high-speed communications medium, such as local area network (LAN).

DCS is process oriented: it looks at the controlled process as the center of the universe, and it presents data to operators as part of its job

In a DCS, the data acquisition and control functions are performed by a number of distributed microprocessor-based units situated near to the devices being controlled or the instrument from which data is being gathered.

The SCADA system covers larger geographical areas. It may rely on a variety of communication links such as Radio and Telephone

Closed loop control is not a high priority in this system.

SCADA is data-gathering oriented: The control center and operators are the center of its universe.
The remote equipment is merely there to collect the data-though it may also do, some very complex process control.

?WHAT IS TAG OR POINT IN SCADA/HMI/DCS We often receive basic questions like “What is Tag”, so this is an article dedicated to our beloved newbies. Because of your support,

Login Socially! by Your Gmail/LinkedIn Accounts

Lets be in Touch